In every village there is one
We always try to sleep far from houses, very busy roads, urban areas…in search of a quiet place, where we do not bother anybody, and firstly, where nobody can bother us.
And despite getting lost in the forest, hiding yourself behind trees, driving to the top of a mountain or finding a secluded beach, tranquility is not always guaranteed.

I can not remember his name, and it is not because he did not do merit for it, but if one day you decide to come here, he will be waiting for you.

We start the walk from Emens Cave. One of the longest caves in Bulgaria with 3113 meters, and home to of hundreds of bats in Bulgaria.

It was Saturday, and there were another 4 or 5 cars of people like us, who came here to hike the trail through the Emenski Canoyon. All but one. A 60 years old guy, retired because of heart problem, (although I think he meant mental problems), and with very little to do. A man who tired of seeing always the same faces in Emen, his villages, use to come here during the weekends in search of new passers-by. New victims of his boredom.

And then he found us.

He spoke to everybody who dared to pass by. He was like the guy who welcomes you at the entrance of the circus, or like the one who collects tickets before passing the metal swing doors/bars to get to a roller coaster. He was sitting right where the path begins, where it becomes narrowing. Where even if you don’t want, you have to pass by his side.

He lived with his mother. He brought us flowers and tea. Depending on whether or not there was people around he came and go. If we move from our chairs he was always there to quickly sit on one of them. He told us about his small pension, about a mysterious gold mine hidden in the area, he spoke about his wife who lived 25 kilometers far from him, and one cigarette after another he made us aware of his poor health due to a previous stroke. He spoke of many more things, but either we did not understand him or we weren`t paying attention.
Despite his strange sanity, he was not very annoying, but, will he go soon? or, will he wait for the last car to go? This last car was going to be ours, because we went to overnight right there.

After the walk and the drive from Romania, we only wanted to have dinner, look at the stars and chill out with the only noise of the river and the animals around. So, very kindly, we had to invite him to leave.

“Do you think he will come back later on?” – Lidia asked
It was almost 10 at night, It seemed unlikely he came at night walking form the village. what for?

Suddenly a noise wakes me up. Lidia is with her eyes open next to me. Inside the van there is like the glow of a light. We check the time, 3:15am. Instantly we heard somebody coughing and walking around the van.
We opened the window and in the darkness we see the shape of a person, towards whom we point a powerful light, blinding him.
The person is roughly 4 meters from the van, dress with a long black coat and a long walking stick. Right next to a bonfire. Staring at us.
Seconds after he says “Do you have a cigarette?”. It is him, his voice.
It was even reassuring to know it was him, at least we knew the person. We told him to go to his f…ing house and quickly we closed the window so as not to give him any change to start talking.

We lie down again, and not even 5 minutes after we start feeling like somebody is touching the burden we carry on the bicycle rack.
Sure it was going to be him but… will he be with someone else? Didn´t he understand the tone of voice we used when we told him to go to his f…ing house wasn´t friendly at all?

With a front light on the head, a flashlight in one hand and the axe in the other, we open the door to see what was going on. We walked out the van and suddenly we see him jumping from behind the van, paralyzed in front of us, wordless and staring at us, with the walking stick in one hand, a pen and a roll of toilet paper on the other.

He strongly disagrees with our attitude and behavior, “why the axe?” He asks. He says those kind of situations are not good for his week heart and health. He was only writing his phone number, name, and address on the back of the van with a pen. What is wrong with us?

He put the fire off, gently asked us to say good night to him and then he left.

We could sleep until morning, he never came back. 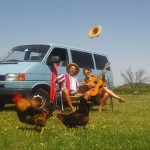 Country
Around the world

About Me
Javi and Lidia, a couple who live travelling in their van since May 2014. United by the passion of travelling, the desire to learn, the feeling of freedom, and the interest in other cultures. Our first great journey with La Furgo was through Europe, driving 15.000 km between Spain and Greece during 6 months. We have spent a year discovering Scotland, planning our great jump around the world, and working on a website project where  we hope to awake restless souls to leave fear behind and discover the world. On October we will drive the mythical Panamericana Road, crossing the tree Americas!