Ocean, beach, three yoga shalas to practice in, beautiful people around me, amazing food and every day sun and heat. I’ve been living in paradise in the last few months, but I’ve been working hard in paradise as well.

I’ve been on the road now for fourteen months. Well, more or less. Legally I have to be in the Netherlands for four months a year and over summer I did spent that amount of time in my country: visiting family and friends. For the rest I spent my time in Nicaragua, Costa Rica, Panama, Belgium, Spain, Morocco and India. Being on the road all the time gives a lot of people around me the idea I’m not doing anything. I know I’m posting pictures of me in crazy asanas, of cows sunbathing on the beach and of fun scooter rides in the countryside. But that doesn’t say I’m not doing anything. I am working hard in paradise. I get up at 5.30 every morning to do some meditation. Two, three, four times a week I teach or assist in the first yoga class of the day at 6.30 a.m. I teach four hours a day minimum. Rest of the day I spent on preparing classes, blogging, photography, making videos, studying, doing pranayama and my own yoga practice, answering questions of students and doing social media. My days are more than full. I live in paradise and at the same time I’m working hard in paradise. And I’m not the only one.

The rules of Western society

Slowly there is this group of world nomads forming. People who don’t believe in borders anymore, just like John Lennon. Who don’t let themselves being hold back by the rules of Western society. People who don’t believe that dollars or euros are going to make them happy. People who don’t want to watch nature documentaries on television, but who want to experience life in every cell of their body by climbing up mountains themselves, hiking up volcanoes and through nature, celebrating holy festival in their countries of origin. People who want to experience culture by bathing in it instead of by googling about it.

My friends Erwin and Elena are part of this group. My friend Nathan is part of this group. Yoga teachers like Jenn Russel are part of this group. They are all nomads. Some are digital nomads, some are yoga nomads, some are musical nomads. But they are all nomads. Governments can’t hold them back anymore within their borders. They have successfully transcended this false idea that a steady job and owning a house will make you happy. They have swapped their television for a backpack, their car for a plane ticket, their job for adventure and their house for an AirBnB, guesthouse, hostel or room somewhere in paradise.

They are free, they have life flowing through their veins. Yet, they work hard. They are the new generation. The pioneers that make money online or around the world by being their, working locally; sharing their knowledge and passion. That dare to experiment and innovate.

They don’t watch television, but meet up with people at night, jamming at a campfire, singing mantras or listening to jazz. They don’t have lunch in a canteen on a business park, but in a local restaurant in a big city or small fishermen’s village. They don’t complain about their neighbors talking so loudly that they can sleep, but go to bed with a smile, listening to crowing crows, cook-a-doodle-doing of roosters and the howling of wolves. They don’t think about next months meeting, but about where they want to life and work next. They don’t complain about a cancelled meeting or delayed train. They take life as it comes and let the road takes them wherever the universe think they should go.

Italy: my next paradise

As for me? I’m part of these nomads as well. A yoga nomad, a digital nomad. I always knew I was a wanderer and I feel at home among wanderers. Next week I’m leaving my Indian paradise behind. London was an option to go to, Thailand was an option, Malaysia looked like an option. Yet Italy it will be. Following my heart. Knowing I will find a new paradise and I’ll be working hard in paradise there as well. Yet: I’ll be among Italians, swapping my Indian curries for Italian pastas, my lassies for ice-cream and the beach for mountains. For how long? For as long as my heart desires and up until the next paradise will call me. And you? Will I see you soon in paradise as well or do you prefer living your life in front of your television; on your sofa? 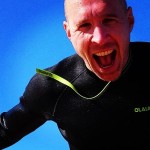 About Me
Yoga rebel (RYT E500), massage therapist, writer, entrepreneur, healthy food lover, blogger, photographer, videographer and globetrotter. I travel around the world, teaching yoga everywhere I go, give healing massages, blog about yoga, food, massages and my adventures and I'm trying to figure out 'what the meaning of life is'. My students call me the Dutch Smiling Yogi, because that's what I always do: smile.